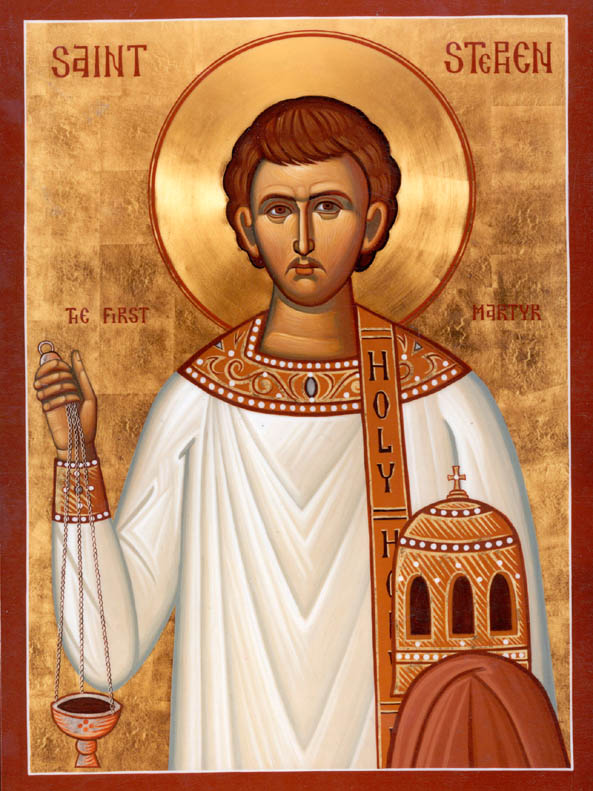 Saint Stephen, one of the first ordained deacons, was the first Christian martyr. St. Stephen was so conformed to Jesus in his holy life that his martyrdom was both a natural and supernatural sign of his love for the Lord. It also inspired the early believers as they faced the first round of brutal persecution.

The Acts of the Apostles contains an account of the choice of the first seven deacons of the Church. The Twelve Apostles ordained seven deacons to oversee the care of some of the Greek-speaking widows who were neglected in their practical needs. Stephen was the oldest of the seven deacons and given the title of “archdeacon,” the chief among them. We know very little about St. Stephen before this but that he was Jewish and may have come came from among the Greek speaking believers.

The Bible records that Stephen “full of grace and power, did great wonders and signs among the people.” St. Stephen was renowned for his great preaching and miracles and his popularity created enemies among some Jews and members of the Synagogue. They debated with him, to generate evidence against him in furtherance of their persecution of the early Church and accused him of blasphemy.

St. Stephen was put on trial and several false witnesses were brought to testify that he was guilty of blasphemy. He was charged with predicting that Jesus would destroy the Temple and for preaching against Mosaic law.

During his defense against the false accusations, Stephen was filled with wisdom from heaven. He responded by quoting from the scriptures and explained how disobedient Israel had become, despite the goodness and mercy of the Lord. Stephen explained that Jesus had come to fulfill the law of Moses, and not destroy it.

As Stephen concluded his defense, he looked up and saw a vision of Jesus standing at the right hand of God. He said, “Look, I can see heaven thrown open and the Son of Man standing at the right hand of God.” That vision was taken as the final proof of blasphemy to the Jews who did not believe Jesus was the Messiah or Son of God. For them, Jesus could not possibly be beside the Father in Heaven. The crowd rushed upon Stephen and carried him outside of the city to stone him to death.

As Stephen was being brutally stoned, he spoke his last words, “Lord Jesus, receive my spirit. Lord, do not hold this sin against them.” Words which echoed the very words of Jesus on the Cross. Following those words, Stephen died, in the Lord.

St. Stephen was buried by Christians, but the location of his tomb is not specified in the New Testament and may have been forgotten for a time. In 415 a Christian priest claimed he had a vision of the tomb and located Stephen s remains. A name inside the tomb confirmed the find.

St. Stephen is the patron saint of Altar Servers, bricklayers, casket makers and deacons and his feast day is celebrated on December 26.