The Amazing Miraculous Story of Our Lady of Guadalupe! 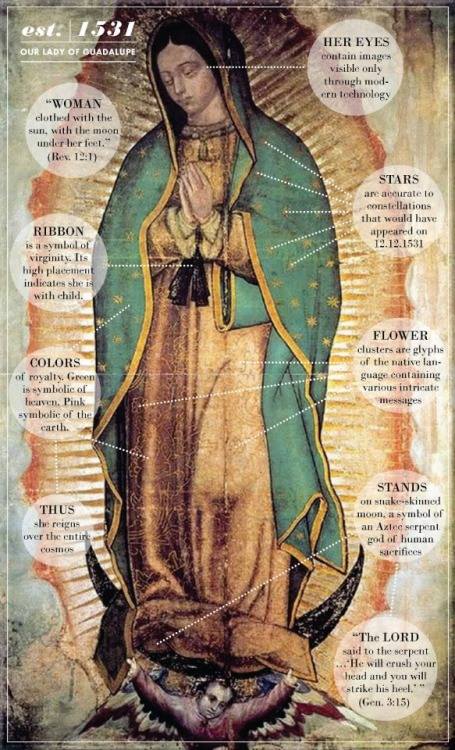 On December 9, 1531, Our Lady appeared to Blessed Juan Diego who was a recently converted Aztec. She asked his to go to the Bishop and request him to build a church for her on the barren hill of Tepeyac which is now part of Mexico City. Our Lady wanted to show her merciful love to all of her children. The prudent Bishop asked Juan to ask the Lady for a sign. Juan did so and Our Lady promised to give him the sign.

On December 12, Our Lady again appeared to Juan on Tepeyac Hill and told him to pick the Castilian roses which miraculously appeared there and bring them to the Bishop as a sign for him to believe her request. Juan gathered the roses into his tilma and brought them to the Bishop.

He opened the tilma to show them and, to everyone’s astonishment, the Image of Our Lady appeared on it. The Bishop then built the church as Our Lady had requested and ten million natives were converted and baptized to the one, true faith within the next 10 years. Human sacrifice ended in Mexico forever. Our Lady of Guadalupe, which means Crusher of the serpent’s head, brought the light of the true faith, crushed the false gods of Mexico, and established an era of peace.

The image to this date, cannot be explained by science.

The image shows no sign of deterioration after 450 years! The tilma or cloak of Juan Diego on which the image of Our Lady has been imprinted, is a coarse fabric made from the threads of the maguey cactus. This fiber disintegrates within 20-60 years!

There is no under-sketch, no sizing and no protective over-varnish on the image.

Microscopic examination revealed that there were no brush strokes.

The image seems to increase in size and change colors due to an unknown property of the surface and substance of which it is made.

According to Kodak of Mexico, the image is smooth and feels like a modern-day photograph. (It was produced 300 years before the invention of photography.)

The image has consistently defied exact reproduction, whether by brush or camera.

Several images can be seen reflected in the eyes of the Virgin. It is believed to be the images of Juan Diego, Bishop Juan de Zummaraga, Juan Gonzales, the interpreter and others.

The distortion and place of the images are identical to what is produced in the normal eye which is impossible to obtain on a flat surface.

The stars on Our Lady’s Mantle coincide with the constellation in the sky on December 12, 1531. All who have scientifically examined the image of Our Lady over the centuries confess that its properties are absolutely unique and so inexplicable in human terms that the image can only be supernatural!