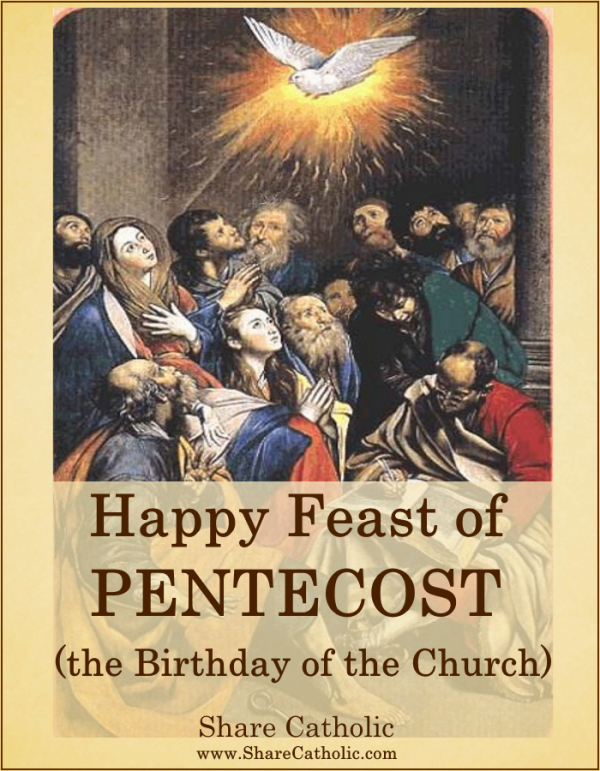 Pentecost is the 50th and final day of the Easter Season which celebrates the descent of the Holy Spirit upon the Church. It is mentioned in the Acts of the Apostles and St. Paul’s First Letter to the Corinthians.

The Feast of Pentecost has its roots in the Jewish feast of Shavout, the Festival of Weeks. Jews from all over were gathered in Jerusalem to celebrate the Jewish feast. On that Sunday, ten days after the Ascension of Our Lord, the Apostles and the Blessed Virgin Mary were gathered in the Upper Room, where they had seen Christ after His Resurrection:

When the day of Pentecost had come, they were all together in one place. And suddenly a sound came from heaven like the rush of a mighty wind, and it filled all the house where they were sitting. And there appeared to them tongues as of fire, distributed and resting on each one of them. And they were all filled with the Holy Spirit and began to speak in other tongues, as the Spirit gave them utterance.(Acts 2:1-4)

The Apostles began to preach the Gospel in all of the languages that the Jews who were gathered there spoke, and about 3,000 people were converted and baptized that day.

Jesus had told his Apostles before ascending to Heaven, “You shall receive power when the Holy Spirit has come upon you; and you shall be my witnesses in Jerusalem and in all Judea and Samaria and to the end of the earth.” Pentecost celebrates this outpouring of the Holy Spirit on the Church and is widely considered as the birthday of the Church. It was from this point on that the Apostles carried the message of Christ to the whole world.