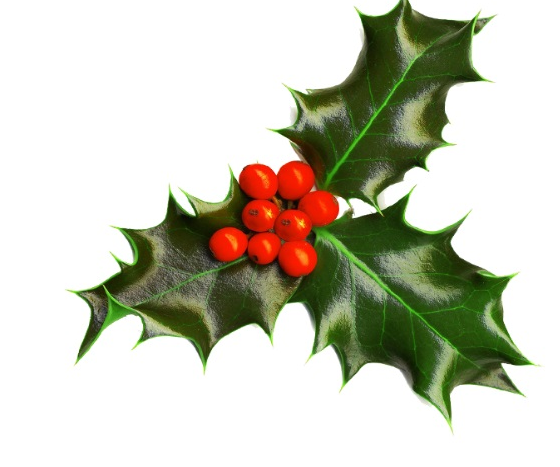 Holly is an extremely hardy shrub that can be grown most places, making it one of the few plants that can withstand temperatures from 110 degrees F to – 40 degrees F. The four hundred species of holly, ranging from dwarf holly plants six inches high to huge holly trees seventy feet tall, are native to all the continents except Antarctica and Australia. Holly plants are noted for their attractive red berries and glossy, sharp-toothed green leaves which remain on the plant year round. The holly bush represents immortality, a trait that God has given to each human being. We are all destined to live forever, either with the Lord or separated from Him. The sharp-toothed edge of the holly leaf reminds Christians of the crown of thorns with which the soldiers mocked Our Lord during His Passion. They laughingly hailed Him as king, never realizing that He is, indeed, King of the universe. As a Christmas symbol, the red holly berry represents Christ’s blood, shed for all people including those who reject Him.

Lord, You have destined me to live forever in eternity with You. But what a price You paid for my salvation, even to being mocked, beaten, and crucified. Your Blood was the price of my eternal life. Lord, may I be forever grateful. Amen.