Reasons to be Pro-Life and the arguments against Abortion 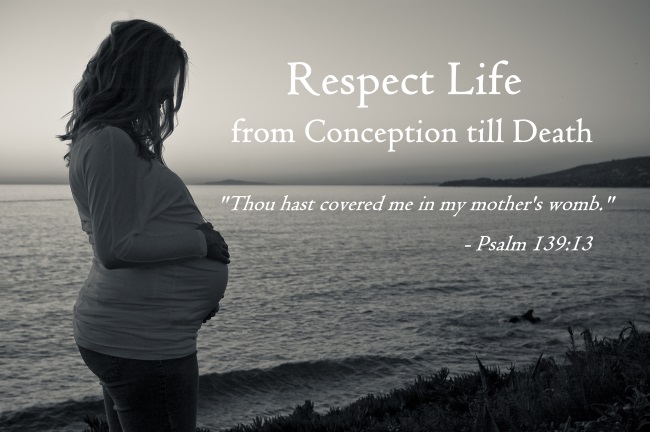 Everywhere in the world, more so in America, the culture of death has already seeped into society and blinding people into accepting that it is acceptable to take the life of the unborn, the elderly through euthanasia and the death penalty in unwarranted circumstances. In this post, I will explain some of the reasons to be pro-life and the arguments against Abortion. This article is in no way aimed at offending anyone; it is just a means of understanding the pro-life point of view.

It is wrong to kill or harm any person. We have received the gift of life from God and it is a sin against God and his creation to take the life of another human person. Every human person has basic rights like the right to live and right to bodily integrity. These basic rights are endowed on all human beings created in the likeness and image of God. Abortion is an offence against God and his creation and not just a matter of personal choice.

“He, who sheds the blood of man, shall have his blood shed by man; for in the image of God has God made man.” – Genesis 9:6

Is the unborn baby a human person?

Life begins at conception, even though as only a cell. This cell or clump of cells has its own distinct genetic makeup that is unrepeatable and unchanging. These cells are alive just as one celled creatures that science has proved to be living. The same logic applies to the unborn baby in the womb. The clump of cells just needs nutrition and time to grow into a mature human person.
Pro-abortion advocates often argue that a fetus becomes human when it can live on its own outside of its mother’s womb. This is not true as the requirement for being human does not depend on one’s dependence on another, else a new born baby or a person suffering from Alzheimer’s would be less human. A life is human based on its nature, not on the basis of how independent a person is or how physically capable a person is.

Another argument is that, since the unborn cannot reason or interact with another person, it is not really a human person. This again lacks logical reasoning since the same criteria could be applied to children born with mental impairments or people in coma. But it would certainly be a crime to kill a mentally impaired child.

The Bible refers to the unborn baby as a child and that every unborn child is known personally by God.

“My every bone was known to you when I was being formed in secret, fashioned in the depths of the earth. Before I took shape, your eyes saw me, and before any one of my days came to be there were written down in your book.” – Psalm 139:15-16

“Before I formed you in the womb I knew you, before you were born I set you apart.” – Jeremiah 1:5

“The Lord called me when I was in my mother’s womb; he pronounced my name before I was born.” – Isaiah 49:1

“The moment your greeting sounded in my ears, the baby within me suddenly leapt for joy.” – Luke 1:44

Pro-abortion activists would say that the fetus is part of the woman and she has the right to do as she wishes with her body. The unborn child is not just an organ that is a part of the body like a hand or foot. There is no way my hand or foot could live outside of my body. The unborn child has its own human DNA and can even have a blood type different from the mother. The woman has no more right to kill an unborn child than she does to kill a born child. Not everyone can do as they choose to their body; it is not a right to take illegal drugs.
Since the unborn child is a person, it cannot be owned. There are those who claim that the unborn is the property of the woman. But what stops the born child from being the property of the woman then? We certainly do not consider a born baby to be the property of the woman.
There are also claims that abortion would be widely accepted if men could have got pregnant and had to face the same scenario as women. But the fact is that abortion is more widely supported by men than women, in those who perform the abortions and those who favor it.

Slavery was also legal and so was killing of Jews by the National Socialist Party in Germany headed by Hitler. Since it is a given that it is a sin against God to kill, any law that opposes divine law has to be held invalid.
The law in the United States is very inconsistent in its stance towards the unborn in that a person who kills a pregnant woman is charged with manslaughter of both mother and child, but the law allows a woman to kill her own unborn child. How one can reconcile the two, is beyond my understanding.

The Mosaic Law also considered the unborn as a person.

“If people are fighting and a pregnant woman is hit, so that there is a miscarriage, but she is not injured, the one who hurt her will pay the fine demanded by her husband and sanctioned by the court. But if there is serious injury you are to take life for life…” Exodus 21:22-23

Some of the pro-choice are against late term but support first trimester abortions. This division has no biological, philosophical or moral basis. There is nothing separating one from the other, other than time and nutrition. Science has proven that late term abortions cause pain to the unborn baby.

Every reasonable person would condemn rape; there is nothing that can justify it. All the people who were conceived out of rape would rather be existent rather than not, despite the pain it might have caused the mother. We cannot decide to kill a baby based on the way it was conceived. The circumstance of one’s conception does not affect one’s right to live. It takes immense courage to undo an act of rape, and that is what a rape victim does in giving birth. The rapist commits an act of violence that undermines the wellbeing of someone else whereas the mother chooses not to commit violence but instead maintain the wellbeing of someone else. The rapist inflicts injury on another person for his own pleasure whereas the woman upholds the wellbeing of someone else despite her own suffering. This is an extremely rare case and 99% of abortion cases are not because of rape and incest, but this is widely used by the pro-choice to advocate abortion without emphasizing how rare these cases are.

Before 1973, federal and state laws in the United States prohibited or restricted abortion. On January 22, 1973 in the Roe Vs Wade case, the Supreme Court decided that all federal and state laws outlawing abortion violated a constitutional right to privacy. Norma McCorvey (Roe) was faced with an unplanned pregnancy and since Texas state law restricted abortions, she chose to go to court. Hers was the case that legalized on demand abortions. Later on she realized the errors of her ways and converted to Christianity and went on to become a Catholic.