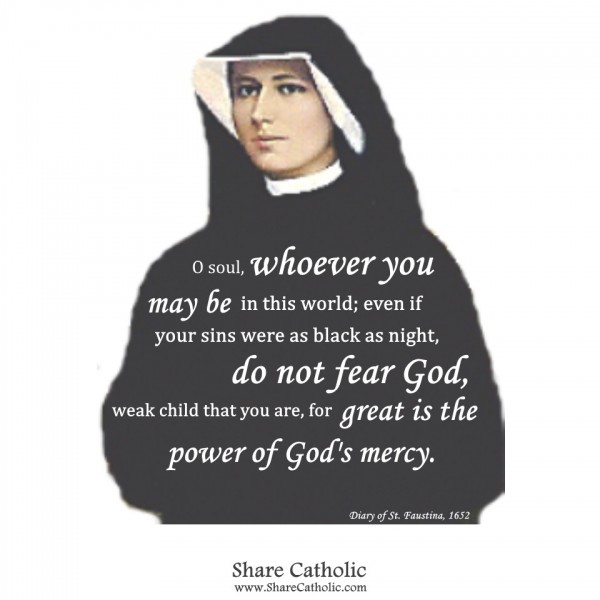 Saint Maria Faustina Kowalska of the Blessed Sacrament was born as Helena Kowalska, in Glogowiec, Leczyca County, north-west of Lódz in Poland on August 25, 1905.

In 1924, Faustina experienced her first vision of Jesus. While at a dance with her sister, Natalia, Faustina saw a suffering Jesus and then went to a Cathedral. According to Faustina, Jesus instructed her to leave for Warsaw immediately and join a convent. On February 22, 1931, Faustina was visited by Jesus, who presented himself as the “King of Divine Mercy” wearing a white garment with red and pale rays coming from his heart. She was asked to become the apostle and secretary of God’s mercy, a model of how to be merciful to others, and an instrument for reemphasizing God’s plan of mercy for the world.

In her diary, Faustina writes:
“In the evening, when I was in my cell, I became aware of the Lord Jesus clothed in a white garment. One hand was raised in blessing, the other was touching the garment at the breast. From the opening of the garment at the breast there came forth two large rays, one red and the other pale. In silence I gazed intently at the Lord; my soul was overwhelmed with fear, but also with great joy. After a while Jesus said to me, ‘paint an image according to the pattern you see, with the inscription: Jesus, I trust in You.’

On October 5, 1938, Sister Faustina (Helen Kowalska) died in a convent of the Congregation of Sisters of Our Lady of Mercy in Cracow, Poland.