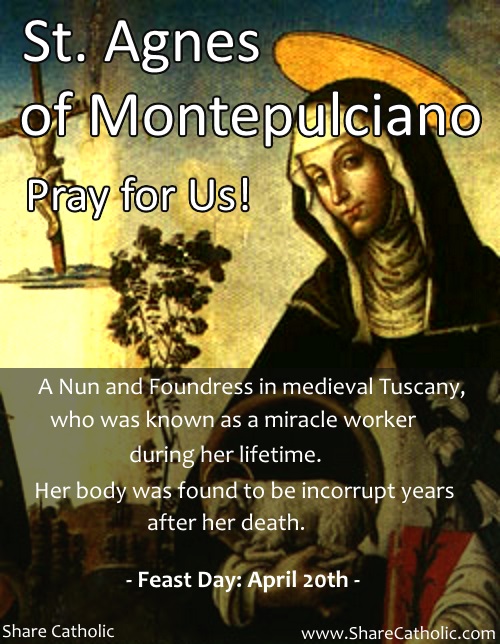 St. Agnes was born on January 28, 1268 in Gracciano, a small village near Montepulciano. Since her childhood, she felt a fascination for spiritual things. At the age of nine, she convinced her parents to allow her to enter a Franciscanmonastery of women in the city known as the “Sisters of the Sack”, after the rough religious habit they wore. They lived a simple, contemplative life. She received the permission of the Pope to be accepted into this life at such a young age, normally against Church law.

In 1288 Agnes, despite her youth at only 20 years of age, was noted for her devotion to the Blessed Sacrament and deep life of prayer, and was elected as the abbess of the community. There she gained a reputation for performing miracles: people suffering from mental and physical ailments seemed cured by her presence. She was reported to have “multiplied loaves”, creating many from a few on numerous occasions, recalling the Gospel miracle of the loaves and fishes. She herself, however, suffered severe bouts of illness which lasted long periods of time.

In 1306 Agnes was recalled to head the monastery in Montepulciano. Agnes reached a high degree of contemplative prayer and is said to have been favored with many visions. After her return, she proceeded to build a church, Santa Maria Novella, to honor the Blessed Mother, as she felt she had been commanded to do in a mystical vision several years earlier.

Agnes died in 1314, at the age of forty-nine. When her body was moved years after her death to the monastery church, it was found to be incorrupt. Her tomb became the site of pilgrimages.