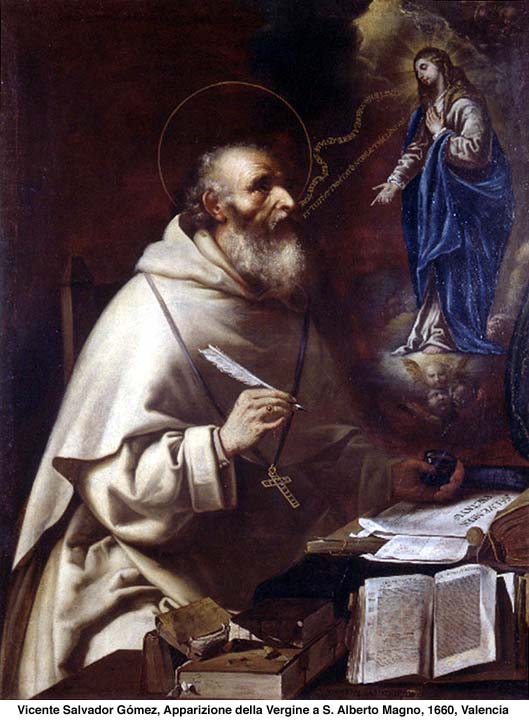 St. Albert was known as the “teacher of everything there is to know,” was a scientist long before the age of science, was considered a wizard and magician in his own lifetime, and became the teacher and mentor of that other remarkable mind of his time, St. Thomas Aquinas.

He was born in Lauingen on the Danube, near Ulm, Germany; his father was a military lord in the army of Emperor Frederick II. As a young man Albert studied at the University of Padua and there fell under the spell of Blessed Jordan of Saxony, the Dominican who made the rounds of the universities of Europe drawing the best young men of the universities into the Dominicans.

After several teaching assignments in his order, he came in 1241 to the University of Paris, where he lectured in theology. While teaching in Paris, he was assigned by his order in 1248 to set up a house of studies for the order in Cologne. In Paris, he had gathered around him a small band of budding theologians, the chief of whom was Thomas Aquinas, who accompanied him to Cologne and became his greatest pupil.

In 1260, he was appointed bishop of Regensberg; when he resigned after three years, he was called to be an adviser to the pope and was sent on several diplomatic missions. In his latter years, he resided in Cologne, took part in the Council of Lyons in 1274, and in his old age traveled to Paris to defend the teaching of his student Thomas Aquinas.

He died a very old man in Cologne on November 15,1280, and is buried in St. Andrea’s Church in that city. He was canonized and declared a Doctor of the Church in 1931 by Pope Pius XI. His writings are remarkable for their exact scientific knowledge, and for that reason he has been made the patron saint of scientists.