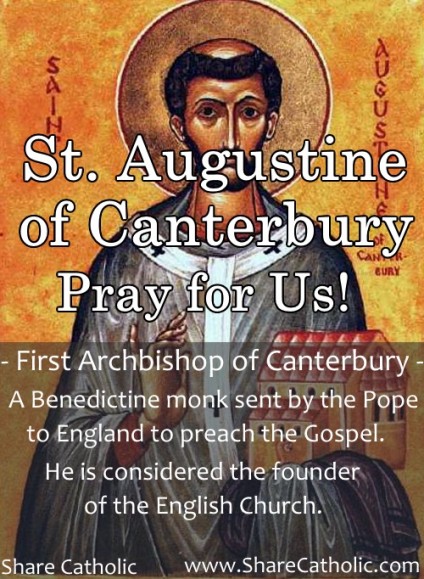 A Benedictine monk who became the first Archbishop of Canterbury in the year 597.

Augustine was the prior of a monastery in Rome when Pope Gregory the Great chose him in 595 to lead a mission, usually known as the Gregorian mission, to Britain to Christianize King Ethelbert and his Kingdom of Kent from Anglo-Saxon paganism. He did not choose those with restless natures or the young looking for new worlds to conquer. He chose Augustine and thirty monks to make the unexpected, and dangerous, trip to England.

When they reached England, King Ethelbert listened to what the missionaries has to say about Christianity. He did not convert then but was impressed enough to let them continue to preach as long as they didn’t force anyone to convert. Later in 597, the King was baptized but he did not force all is subjects to be baptized. He left it to them as a free choice.

Augustine was consecrated as a bishop and converted many of the king’s subjects, including thousands during a mass baptism on Christmas Day in 597.