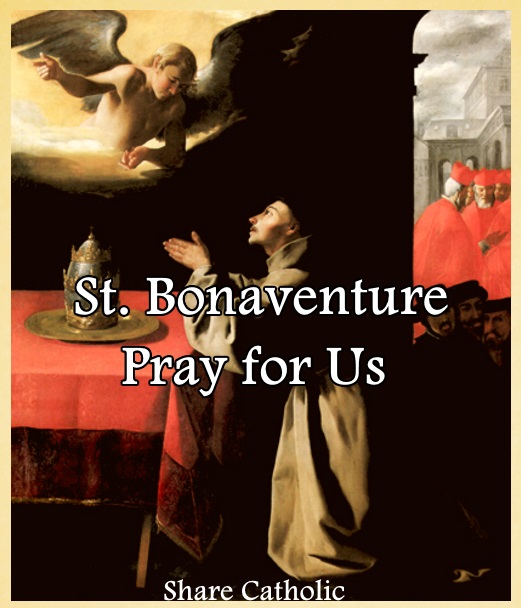 St. Bonaventure, Bishop, Theologian and Doctor of the Churchwas born in 1221. When he was a child, he was cured of a serious illness and was healed through the intercession of Francis of Assisi. At the age of twenty-two St. Bonaventure entered the Franciscan Order.

After making his vows, he went to Paris to study theology and philosophy. In Paris he became a close friend of the great St. Thomas Aquinas. He received the degree of Doctor, together with St. Thomas Aquinas, ceding to his friend against the latter’s inclination, the honor of having it first conferred upon him.

At the age of thirty-five he was chosen General of his Order and restored a perfect calm where peace had been disturbed by internal dissensions. He did much for his Order and composed The Life of St. Francis . He also assisted at the translation of the relics of St. Anthony of Padua.

Pope Clement IV chose him to be Archbishop of York, England, but Bonaventure begged off, claiming to be inadequate to the office. He died while he was assisting at the Second Council of Lyons, on July 15, 1274.