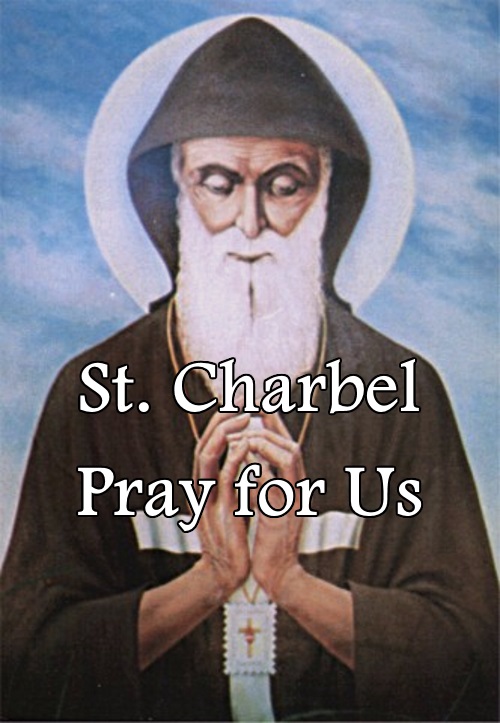 St Charbel was a Catholic priest in the Monastery of St. Maroun at Annaya, Lebanon. During his lifetime he was most notable for his remarkable devotion to the Holy Eucharist and his preference for saying daily Mass at 11:00 a.m., so he could spend almost all the morning in preparation for the Mass, and the rest of the day in thanksgiving afterwards. After 23 years of daily sacrifice in such a meager existence, in 1898 he suffered a seizure while saying Mass, and a priest assisting at the Holy Sacrifice was forced to pry the Holy Eucharist from his grasp. The holy monk died eight days later on Christmas Eve at the age of seventy. He was buried very simply in the monastery cemetery where so many saintly monks before him had been buried. According to monastic custom, the body, which was not embalmed, was dressed in the full habit of the Order and was placed into the ground without a coffin.

St Charbel was buried in the ground without a casket and in very wet conditions, such circumstances certainly should have expedited decomposition. Given such a hidden existence, he would most certainly have been forgotten had not a most extraordinary phenomenon occurred at his grave in the form of an extraordinary bright light, which surrounded his tomb for forty-five nights following the interment. Countless local townspeople saw the miraculous light and because of it and the enthusiasm of the many witnesses of this prodigy, the officials of the monastery requested permission from the ecclesiastical authorities to exhume the body four months after the saint’s death.

On the day of the exhumation, his grave was opened in the presence of the superiors of the Order, the monks of the monastery, and many villagers, the body was miraculously found in perfect condition to the amazement of everyone, even though, as the result of frequent rains which had inundated the cemetery several times since the burial, the body was found floating on mud in a flooded grave. Given that St Charbel was buried in the ground without a casket and in very wet conditions, such circumstances certainly should have expedited decompostition.

Additionally, a remarkable phenomenon accompanied this exhumation; from the pores of the body there exuded a liquid described as perspiration and blood, which had the distinct odor of blood. As a result of this transpiration, the blood-stained clothing upon his person was changed twice a week. Small pieces of this cloth soaked in this mysterious fluid are distributed as relics and these have been said to effect cures.

Among the men of medicine who examined the body was Dr. Elias Elonaissi who declared on November 16, 1921:
“I observed that the pores emitted a matter like sweat; a strange and inexplicable thing according to the laws of nature, for this body that has been dead for so many years. I have renewed the same examination many times, at different periods; the phenomenon has always been the same.”

Another physician, Dr. George Choukrallah, examined the body a total of 24 times during 17 years and declared:
“I have always been astonished at its state of preservation and espe¬cially this reddish liquid exuded by it. .. My personal opinion based on study and experience, is that this body is preserved by a supernatural power.”

For 67 years in modern times, the body of Saint Charbel remained perfectly preserved, the case itself was thoroughly documented and examined by medical professionals and described by all accounts as being supernaturally sustained during this 67 year period. For reasons known only to Himself, God chose not to continue the miracle, and at the time of the beatification in 1965, the body was found to have finally complied with the laws of nature. Today, only his bones remain, and these are of a red color, and the discharge of the fluid has ceased.