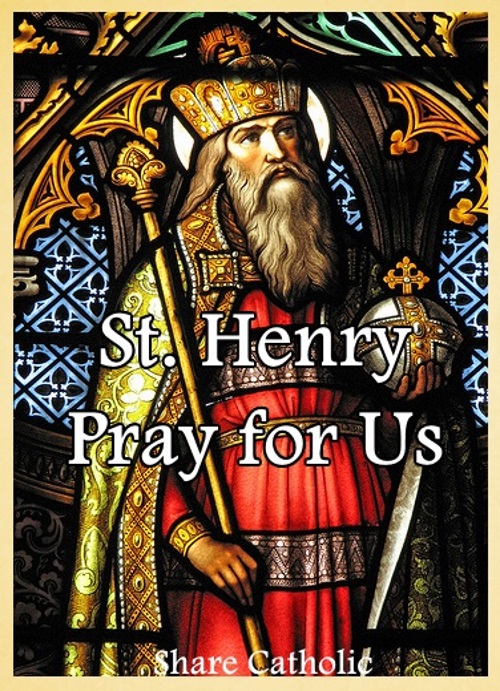 St. Henry, born in 972 was the son of the Duke of Bavaria and the grandson of the King of Burgundy. He was educated under the tutelage of St. Wolfgang, Bishop of Ratisbon. In 995, St. Henry succeeded his father as Duke of Bavaria, and in 1002, he was elected emperor.

Both he and his wife, St. Cunegundes, lived in perpetual chastity, to which they had bound themselves by vow. He founded numerous monasteries, gave liberally to pious institutions and built the Cathedral of Bamberg. His feast day is July 13th. He is the patron saint of the childless, of Dukes, of the handicapped and those rejected by Religious Order.

Lord, you filled Saint Henry with your love
and raised him from the cares of an earthly kingdom
to eternal happiness in heaven.
In the midst of the changes of this world,
may his prayers keep us free from sin
and help us on our way towards you.
Through our Lord Jesus Christ, your Son,
who lives and reigns with you
in the unity of the Holy Spirit,
one God, for ever and ever.
Amen.