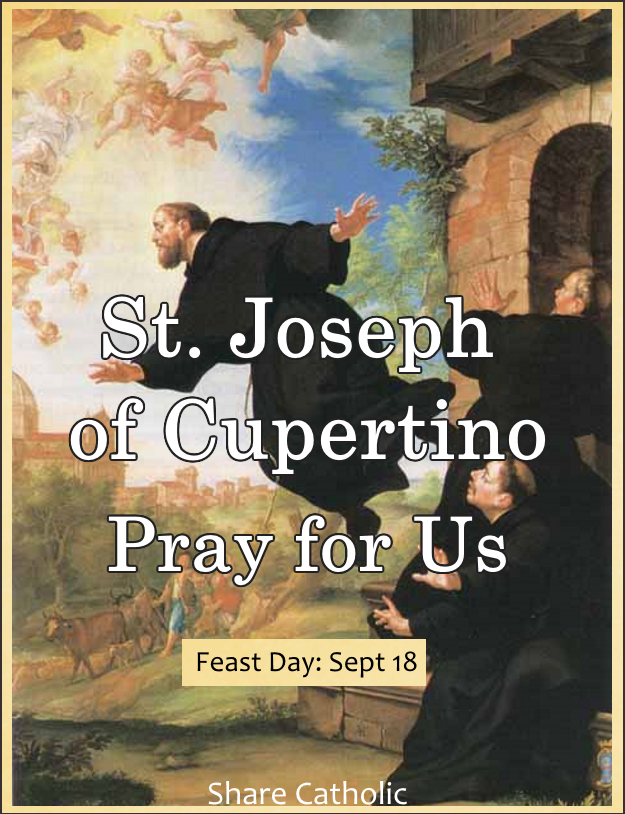 St. Joseph was born at Cupertino,in the Kingdom of Naples, in 1603. As a child, St. Joseph showed a fondness for prayer. He joined the Franciscan Friars Minor Conventual where he began studying for the priesthood.After his ordination in 1628, God began to work many amazing miracles through St. Joseph. On more than seventy occasions, people saw him rise from the ground while saying mass or praying.

The life of St. Joseph was marked by ecstasies and levitations. The mere mention of God or a spiritual matter was enough to take him out of his senses; at Mass he frequently floated in the air in rapture. Once as Christmas carols were being sung, he soared to the high altar and knelt in the air, rapted in prayer. On another occasion he ferried a cross thirty-six feet high through the air to the top of a Calvary group as easily as one might carry a straw.

The people flocked to him in droves seeking help and advice in the confessional, and he converted many to a truly Christian life. However, this humble man had to endure many severe trials and terrible temptations throughout his life. He died on September 18, 1663.

He is the Patron of Pilots, Flying & Studying