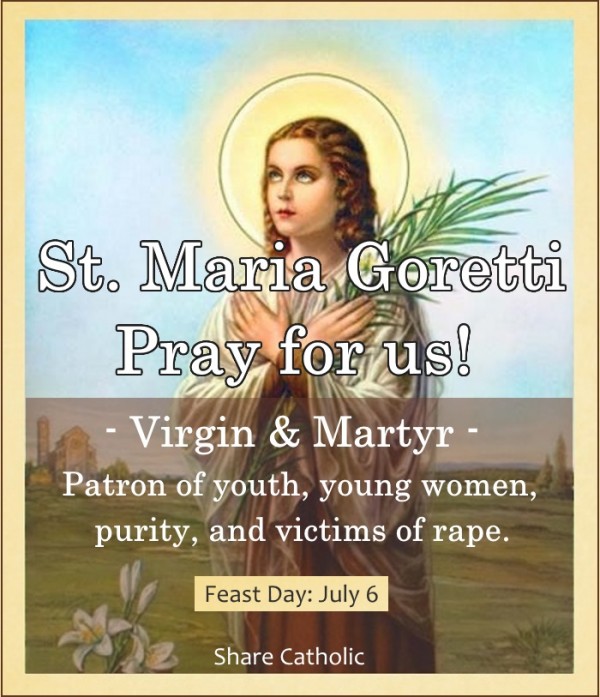 St. Maria Goretti was born in Italy in 1890. Her parents were peasants and she was second of six children. In 1900 her father died of malaria and her mother struggled to feed the children. She started working and left Maria to look after the house and her brothers.

In 1902, Alexander, an eighteen year old neighbor, assaulted and attempted to rape Maria. Maria said that she would rather die than submit to him. Alexander, then, began stabbing her with a knife. Before she died the next day, she forgave Alexander.

Alexander was captured and sentenced to 30 years in prison. He was unrepentant until he had a dream that he was a in a garden and Maria was there and gave him flowers. He woke up the next day a changed man and repented of his crime and began living a reformed life.

After 27 years when he was released, he went directly to Maria’s mother to ask for her forgiveness. Her mother forgave him saying “If my daughter can forgive him, who am I to withhold forgiveness”.

Maria was canonized by Pope Pius XII for her purity as a model for youth. Alexander was there in St. Peter’s crowd to celebrate Maria’s canonization.

St. Maria Goretti is the Patron Saint of youth, young women, purity and victims of rape.