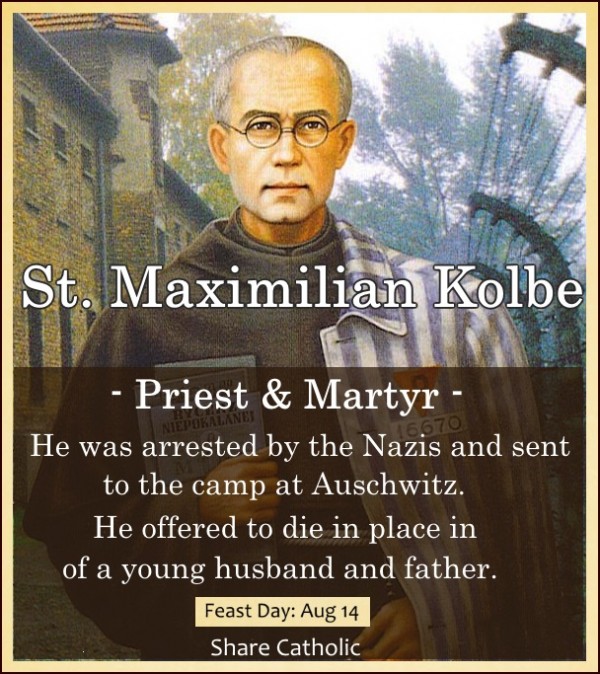 St. Maximilian Kolbe was born in Poland in 1894 to a poor weaver and his wife. His parents were devout Christians and they had a special devotion to Mary.

While he was a boy, he asked Mary, the Mother of God what was to become of him. Mother Mary came to him holding two crowns, one white and the other red. She asked him if he was willing ot accept either of the two crowns. The white meant that he should persevere in purity and the red that he should become a martyr. St. Maximilian said that he would accept them both. From an early age, he believed that he was destined for martyrdom.

When the Nazis invaded Poland in 1939, he was imprisoned and they sent to the concentration camp at Auschwitz in 1941.

On July 31, 1941 when ten men were sentenced to die in reprisal for one prisoner’s escape, St. Maximilian offered to die in place of a young husband and father. He was the last among them to die, after he endured two weeks of starvation and thirst.

O Lord Jesus Christ, who said, “greater love than this no man has that a man lay down his life for his friends,”
through the intercession of St. Maximilian Kolbe whose life illustrated such love, we beseech you to grant us our petitions . . .

He gave up his life for a total stranger and loved his persecutors, giving us an example of unselfish love for all men – a love that was inspired by true devotion to Mary.

Grant, O Lord Jesus, that we too may give ourselves entirely without reserve to the love and service of our Heavenly Queen in order to better love and serve our fellowman in imitation of your humble servant, Maximilian. Amen.