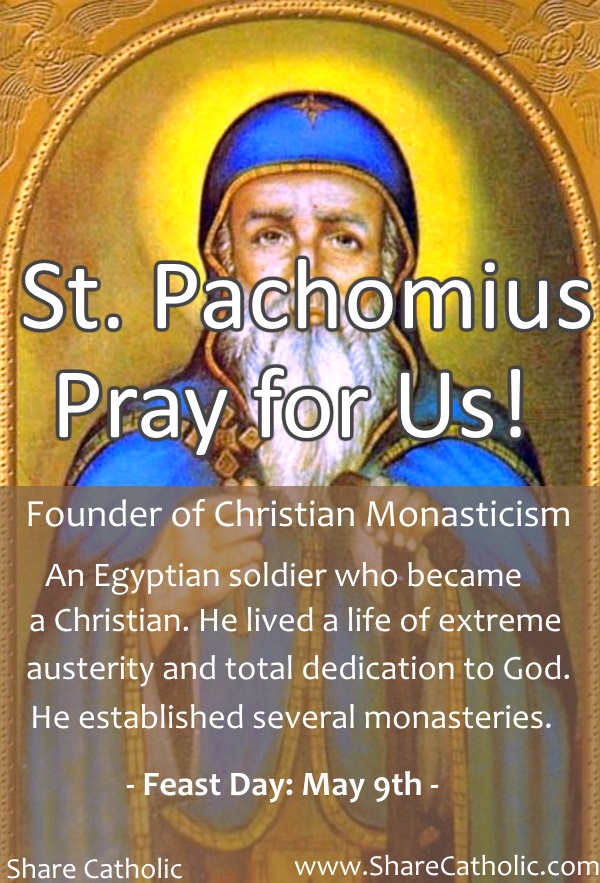 St. Pachomius was born about 292 in ]in Egypt and was inducted into the Emperor’s army as a twenty-year-old. The great kindness of Christians at Thebes toward the soldiers became embedded in his mind and led to his conversion after his discharge.

After being baptized, he became a disciple of an anchorite, Palemon, and took the habit. The two of them led a life of extreme austerity and total dedication to God; they combined manual labor with unceasing prayer both day and night. Later, Pachomius built a monastery on the banks of the Nile at Tabennisi. In a short time some one hundred monks joined him and Pachomius organized them on principles of community living. So prevalent did the desire to emulate the life of Pachomius and his monks become, that the holy man was obliged to establish ten other monasteries for men and two nunneries for women.

St. Pachomius was the first monk to organize hermits into groups and write down a Rule for them. Both St. Basil and St. Benedict drew from his Rule in setting forth their own more famous ones. Hence, though St. Anthony is usually regarded as the founder of Christian monasticism, it was really St. Pachomius who began monasticism as we know it today.