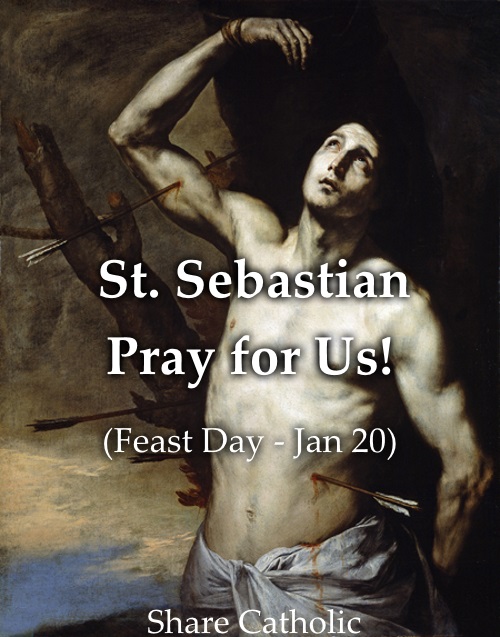 Pray for Us, St. Sebastian!

St. Sebastian was a Roman Martyr and is the Patron Saint of soldiers, athletes, and those who desire a saintly death

St. Sebastian joined the Roman army to provide serice to other Christians who were being persecuted by the Romans. He was recognized for his excellent service and was promoted to serve in the Praetorian Guard.

While serving, St. Sebastian converted several prominent people, including the convincing the local prefect to convert to Christianity. He was reported as a Christian and was brought before Emperor Diocletian and sentenced to death. He was delivered to archers to be shot to death.The archers pierced his body was pierced with arrows and he was left for dead.

When the wife of a servant of the Emperor came to bury him, she found him still alive and nursed him back to health. He recovered but did not flee, instead one day he confronted the Emperor and denounced him for his cruelty to the Christians. This time he was beaten to death and was thrown into the sewers. His body was recovered and buried in the catacombs beneath Rome.