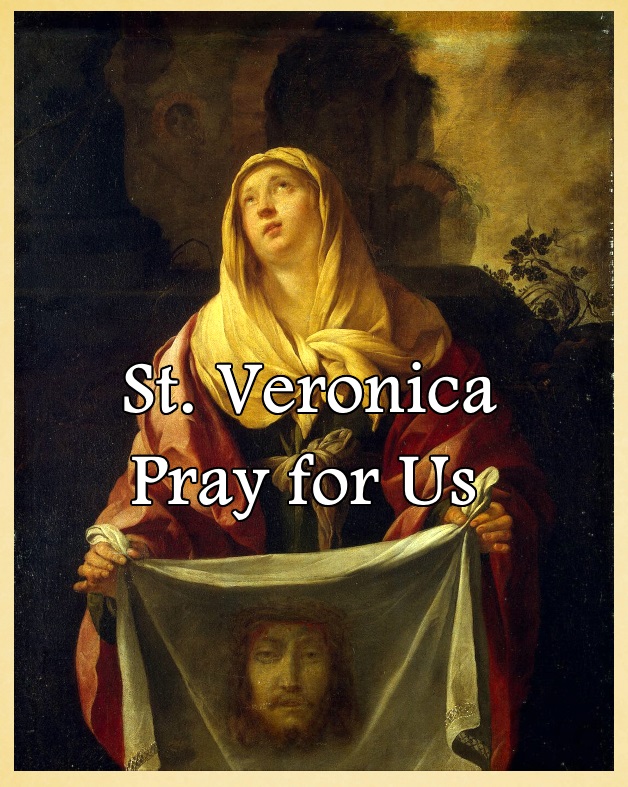 St. Veronica is known as the woman who offered a cloth to Jesus so He could wipe His face on the way to His crucifixion. The cloth is believed to exist today in the Vatican and is considered one of the most treasured relics of the Church.

St. Veronica is not mentioned in the Bible, but is known to us by Catholic tradition and in the Sixth Station of the Cross, “Veronica Wipes the Face of Jesus.”

Legend states that as Christ was walking to Calvary, his face dripping with sweat and blood, St. Veronica, a bystander, was moved with compassion. She approached Jesus and offered Him a cloth, likely her veil, which He accepted and used to wipe His face. The image of his face was subsequently imprinted on the cloth.

Prayer to St. Veronica –
St. Veronica, you gave Christ a towel on His way to Cavalry which He used to wipe the Precious Blood from His Holy Face. In return for this great act of kindness He left you His most Holy image on the towel. Pray for us to Our Lord that His Holy Face may be imprinted on our hearts so that we may be always be mindful of the Passion and Death of Our lord Jesus Christ, through the same Christ our Lord,
Amen.