The Feast of Sts. Michael, Gabriel and Raphael 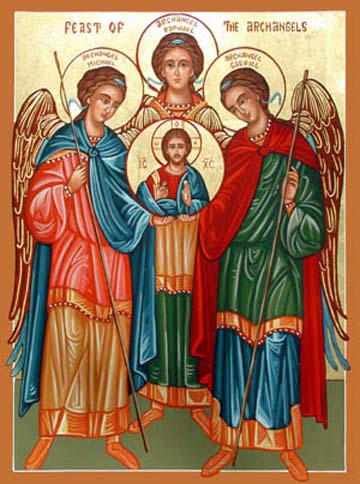 Happy Feast of the Archangels

The Sacred Scriptures have revealed the proper names of only three Angels, all of whom belong to the Choir of the Archangels. The names are well known to all, namely: Michael, Gabriel, Raphael.

St. Michael is described as “one of the chief princes,” in Scripture and was the leader of the forces of heaven in their triumph over the powers of hell. He has been especially honored and invoked as patron and protector by the Church from the time of the Apostles. St. Michael is the patron of grocers, mariners, paratroopers, police and sickness.

St. Gabriel is the angel who appeared to Zachariah to announce the birth of St. John the Baptizer. He also announced to Mary that she would bear a Son Who would be conceived of the Holy Spirit, Son of the Most High, and Savior of the world.

St. Raphael is one of seven Archangels who stand before the throne of the Lord. He was sent by God to help Tobit, Tobiah and Sarah. He is the patron of the blind, of happy meetings, of nurses, of physicians and of travelers.