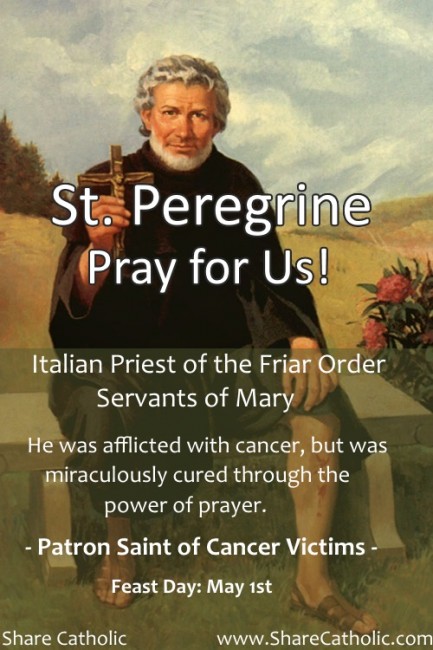 St. Peregrine was born in Forli, Northern Italy, to a wealthy family. He was a member of the anti-papal party when he was young. During an uprising, he struck St Philip Benixi, who was sent by the Pope to mediate. When Philip offered the other cheek, Peregrine was overcome by this that he repented and converted to the Catholic Faith.

After receiving instructions from Mother Mary, who appeared to him in a vison, he joined the Servites (Friar Order Servants of Mary). It is believed that he never allowed himself to sit down for thirty years, while as far as possible, observing silence and solitude.

He had a reputation for fervent preaching and being a good confessor. When he was afflicted with cancer of the foot and amputation had been decided upon, he spent the night before the operation, in prayer. The following morning he was completely cured. This miracle caused his reputation to become widespread. He died in 1345 at the age of eighty-five, and he was canonized by Pope Benedict XIII in 1726.

He is the Patron Saint for persons suffering from Cancer, Aids or other illnesses.