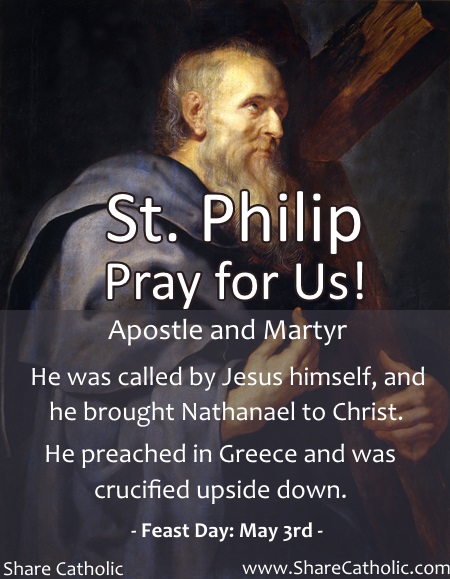 St. Philip was born in Bethsaida, Galilee. He may have been a disciple of John the Baptist and is mentioned as one of the Apostles in the lists of Matthew, Mark, Luke, and in Acts.

He was called by Jesus Himself and brought Nathanael to Christ. Philip was present at the miracle of the loaves and fishes, when he engaged in a brief dialogue with the Lord, and was the Apostle approached by the Hellenistic Jews from Bethsaida to introduce them to Jesus.
Just before the Passion, Jesus answered Philip’s query to show them the Father, but no further mention of Philip is made in the New Testament beyond his listing among the Apostles awaiting the Holy Spirit in the Upper Room. According to tradition he preached in Greece and was crucified upside down at Hierapolis under Emperor Domitian. His feast day is May 3.