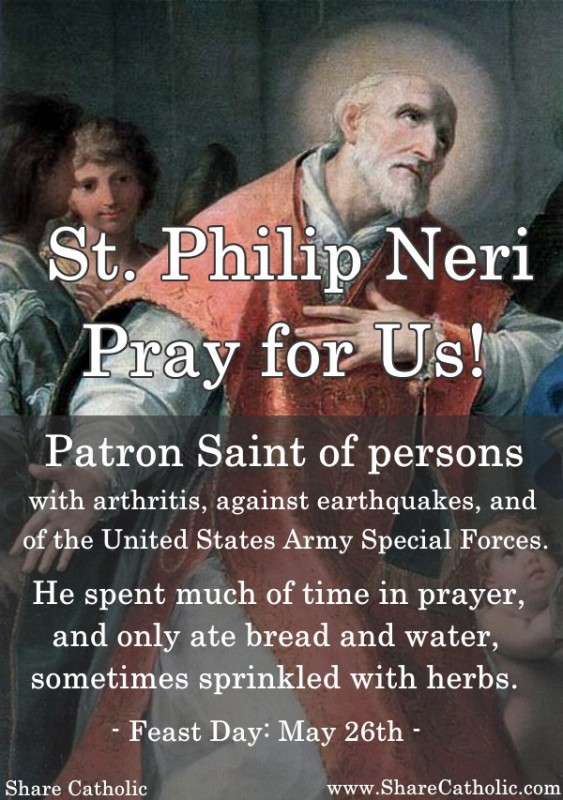 Saint Phillip was born in Florence, Italy, on July 22, 1515. At the age of eighteen Philip was sent to work with an older cousin who was a successful businessman. During this time, Philip found a favorite place to pray up in the fissure of a mountain that had been turned into a chapel. During these hours of prayer he decided to leave worldly success behind and dedicate his life to God.

He went to Rome in 1533 where he studied philosophy and theology until he thought his studies were interfering with his prayer life. He then stopped his studies, threw away his books, and lived as a kind of hermit.

After dark he would go out in the streets, sometimes to churches, but most often into the catacombs of St. Sebastiano to pray. During one of these times of prayer he felt a globe of light enter his mouth and sink into his heart. This experience gave him so much energy to serve God that he went out to work at the hospital of the incurables and starting speaking to others about God, everyone from beggars to bankers.

In 1548 Philip formed a confraternity with other laymen to minister to pilgrims who came to Rome without food or shelter. The spiritual director of the confraternity convinced Philip that he could do even more work as a priest. After receiving instruction from this priest, Philip was ordained in 1551.

Philip died in 1595 after a long illness at the age of eighty years.