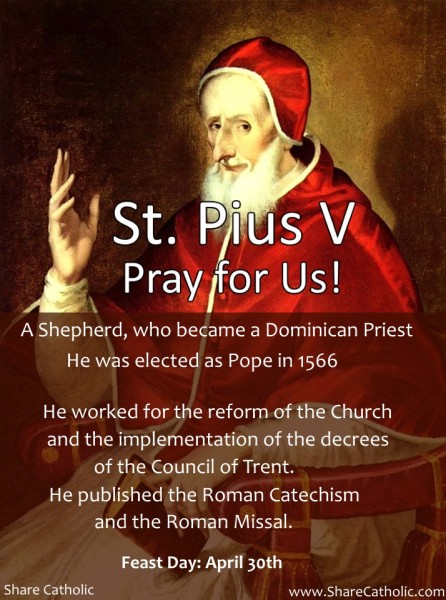 He was born Antonio Ghislieri, in Bosco, Italy, to a poor family. He labored as a shepherd until the age of fourteen and then joined the Dominicans, being ordained in 1528.

He studied at Bologna and Genoa, and then taught theology and philosophy for sixteen years before holding the posts of master of novices and prior for several Dominican houses. He was elected Pope in 1566.

As Pope, Pius saw his main objective as the continuation of the massive program of reform for the Church, in particular the full implementation of the decrees of the Council of Trent. He published the Roman Catechism, the revised Roman Breviary, and the Roman Missal; he also declared Thomas Aquinas a Doctor of the Church, commanded a new edition of the works of Thomas Aquinas, and created a commission to revise the Vulgate. The decrees of Trent were published throughout all Catholic lands, including Europe, Asia, Africa, and the New World, and the pontiff insisted on their strict adherence.