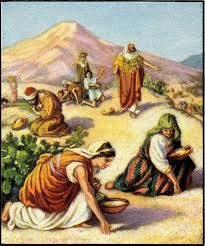 When God delivered the Israelites from slavery He did it in stages:

First: He brought them out of the land of ‘not enough.’ As slaves in Egypt without power, they were forced to depend on Pharaoh for everything. And when you have to keep relying on anyone but God, you’re not really free. God won’t allow you to get ‘hooked’ on anybody but Him. Elijah was living happily by a stream in the middle of a famine. Ravens brought him meat each day. What an arrangement! But one day the ravens didn’t show up and the brook dried up. What happened? God dried up the brook to drive him back to the source! Regardless of who God uses – He alone is the source of all you need.

Second: He brought them through the wilderness of ‘just enough.’ God provided them with manna – just enough for each day. Now it’s no fun struggling to barely get by. But we tend to appreciate what we had to struggle for, and we learn to trust God more. Plus, living through seasons of ‘just enough’ builds into us a tenacity to keep moving toward better things.

Third: He brought them into the land of ‘more than enough.’ God described Israel’s future home as “a land in which you shall… lack nothing.” God’s ultimate goal for you is abundance – in all areas of life! Is that so you’ll have more than the next guy? No! God told Abraham, “I will make of you a great nation, and I will bless you; I will make your name great, so that you will be a blessing.” (Genesis 12:2). Having status and success means being positioned to bless others and fulfill God’s agenda for your life.