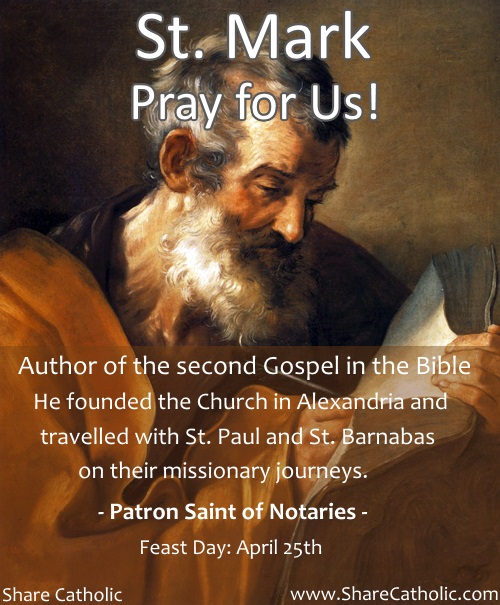 St Mark was a Jew by origin, probably born out of Palestine. The second Gospel was written by St. Mark, who, in the New Testament, is sometimes called John Mark. St. Mark was associated with St. Paul and St. Barnabas (who was Mark’s cousin) on their missionary journey through the island of Cyprus. Later he accompanied St. Barnabas alone. We know also that he was in Rome with St. Peter and St. Paul. Tradition ascribes to him the founding of the Church in Alexandria.

St. Mark wrote the second Gospel, probably in Rome sometime before the year 60 A.D.; he wrote it in Greek for the Gentile converts to Christianity. Tradition tells us that St. Mark was requested by the Romans to set down the teachings of St. Peter. This seems to be confirmed by the position which St. Peter has in this Gospel. In this way the second Gospel is a record of the life of Jesus as seen through the eyes of the Prince of the Apostles.