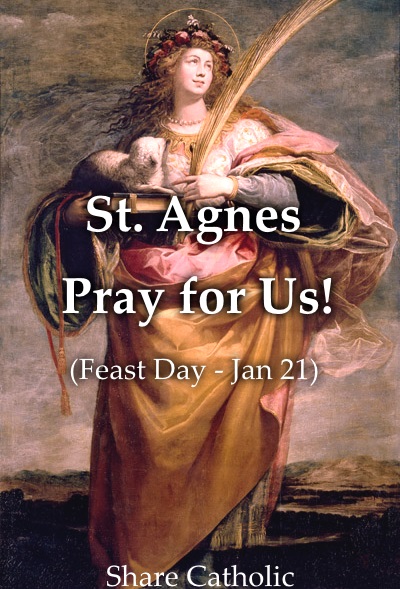 St. Agnes is the patron saint of chastity, engaged couples, girls, virgins and rape victims. Her name means ‘pure’ in Greek and ‘lamb’ in Latin. Pray for Us, St. Agnes!

St. Agnes was born to a Roman noble family was raised in a Christian family. She was a beautiful virgin who many young men wanted to marry. She turned away all suitors declaring that she could have no spouse but Jesus. After she refused one suitor who happened to be the son of a prefect, he reported her to the authorities for being a Christian. She was arrested and condemned to death. Since Roman lay did not permit the execution of virgins, she was instead confined to a brothel where her purity was miraculously preserved.

The son of the prefect was the only man who attempted to violate her, but he was struck blind and healed by the prayer of St. Agnes. She was later killed by the lieutenant of the prefect’s son and she became a martyr at the age of 12.