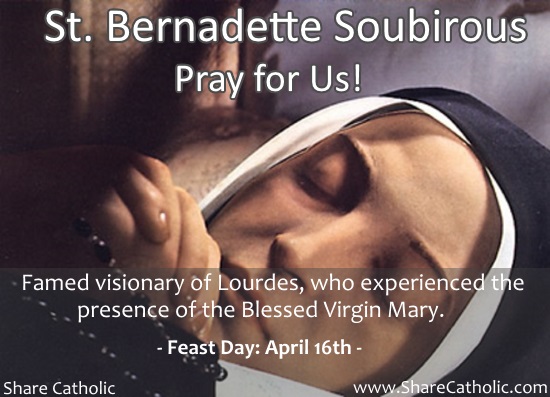 At the age of 14, on February 11, 1858 she was granted a vision of the Blessed Virgin Mary in a cave on the banks of the Gave River near Lourdes. She was placed in considerable jeopardy when she reported the vision, and crowds gathered when she had further visits from the Virgin, from February 18 of that year through March 4.The civil authorities tried to frighten Bernadette into recanting her accounts, but she remained faithful to the vision.

On February 25, a spring emerged from the cave and the waters were discovered to be of a miraculous nature, capable of healing the sick and lame. On March 25, Bernadette announced that the vision stated that she was the Immaculate Conception, and that a church should be erected on the site.

In 1866, she joined the Sisters of Notre Dame in Nevers where she faced some rather harsh treatment from the mistress of novices. This oppression ended when it was discovered that she suffered from a painful, incurable illness. She died in Nevers on April 16,1879.

Lourdes became one of the major pilgrimage destinations in the world, and the spring has produced 27,000 gallons of water each week since emerging during Bernadette’s visions. Since her death, St. Bernadette’s body has apparently remained internally in corrupt, but it is not without blemish. During her third exhumation in 1925, light wax coverings were made for her face and her hands due to the discoloration that her skin had undergone.